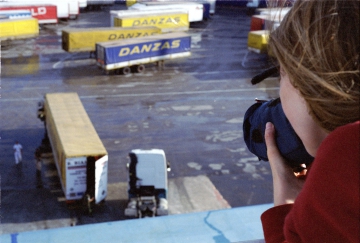 © Mathilde Kohl Born in London in 1970. Studied English literature at Cambridge University before moving to New York and then Paris, where she made short films and videos, including CARGO (2001) shot on a container ship and Border (2004) about Afghan and Iraqi refugees, trying to cross the channel tunnel to England. In the last decade, she has lived in Brussels, Amman, Istanbul and Lisbon, while working on a graphic novel and book project about Iraq: Are you a river? Her work has screened at numerous international film festivals, including Locarno, Rotterdam, Montreal, London, Edinburgh, The New York Video Festival, Film Society of Lincoln Center, on ARTE television and in exhibitions and museums, such as The Reina Sofia Museum, Madrid, The National Gallery of Art, Washington. The Jeu de Paume, Paris and The Wilfredo Lam Contemporary Art Center, Havana. Focuses on her work have included at The 51st Oberhausen International Short Film Festival, Germany, The 41st Pesaro International Film Festival, The Austrian Film Museum, Vienna and “Vidéo et après: Laura Waddington” at The Pompidou Center, Paris. She has received awards including The ARTE Prize for Best European Short Film and The Grand Prix Experimental-essai-art video, Cote Court, amongst others.

Laura Waddington, born in London in 1970, and studied English literature at Cambridge University, before moving to New York, where she worked in independent cinema and made short films. Inspired by electronic musicians, who she met making and distributing work from their apartments, she became interested in alternative modes of production and began shooting video. ZONE (1995), filmed with a spy camera on the QE2 and The Lost Days (1999), the story of a woman’s journey around the world, directed via the Internet with camera people in 15 countries, experimented with the possibilities of the medium. The Lost Days marked the start of an ongoing collaboration with English composer Simon Fisher Turner (Derek Jarman’s Blue, Caravaggio, The Garden).

In 1998, she left New York and lived briefly in Lisbon and Barcelona before moving to Paris. Travelling widely overland on ships, buses and trains because of a plane phobia, she began to focus on borders and people she met trying to cross them. In 2000, The Rotterdam Film Festival commissioned her to make a video for the project “On the Waterfront” a series of digital diaries, shot by ten filmmakers in ports around the world. CARGO (2001) is an account of her journey on a container ship to the Middle East, with sailors from Romania and the Philippines.

In 2002, following extensive travels in Kurdistan, Europe, The Middle East, and the Balkans, researching refugee routes into Europe, she spent months in the fields around Sangatte Red Cross camp, filming Afghan and Iraqi refugees who were trying to cross the channel tunnel to England, (Border, 2004). In 2006, she spent several months in Amman, Jordan recording the tales of Iraqi refugees, who had fled the war in Iraq. In 2008 and 2009 she returned to Jordan for nine months and continued work on the above. In the following years, she lived in a variety of cities, including Istanbul, Turkey, while working on an upcoming graphic novel project, based on one of the stories that had been confided to her.

In 2009, she made a contribution to the collective french film, Outrage & Rebellion, initiated by Nicole Brenez to protest police violence in France. Made in a few weeks, without a budget, using images found on the internet, STILL is dedicated to the memory of Santiago Alvarez and his great short film NOW!

She has received awards including The ARTE Prize for Best European Short Film at The 48th International Oberhausen Short Film Festival, First Prize at Videoex, Zurich in 2002 and 2005, and The Grand Prix Experimental-essai-art video, Cote Court 2005, France.

Analysis of her films and approach can be found in books by Georges-Didi Huberman, Paweł Mościcki, Elena Marcheschi, Scott MacDonald and Stefania Rimini, among others. Her essays on films and art have been published in books and magazines.